It has been a very busy week and I don’t have a post ready for Sunday so I hope you don’t mind this Blast From My Past . . .

I originally posted this in September 2013. I hope you enjoy it. 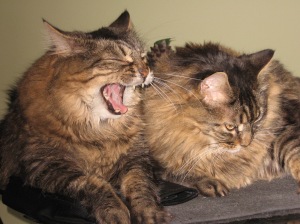 Oops, my straitjacket is slipping…

When you look up at the stars at night do you feel homesick?  Okay, okay, bad joke.  Do you know once upon a time I laughed uproariously at that joke.  I ran around and told all my preteen friends.  Yes, it’s that old.  And so am I.

As we age our funny bone seems to migrate.  For some people it ends up around the nether regions.  For others humour becomes more cerebral.  I don’t know the equation to what’s funny.  I don’t even know what makes me laugh until I am actually laughing.  When was the last time you laughed so hard there were tears running down your face?  Do you remember the knee slapping, rib tickling, gut wrenching guffaws you used to hear when a group of people got together to watch a comedy film?  I don’t, at least not recently.  The last time I had one of those all-encompassing, falling on the floor cackles was watching an old movie.

The movie was ‘Buffy the Vampire Slayer’.  I don’t remember the movie.  I don’t even know if it was actually a comedy.  What I do remember is my boyfriend and I beating on the furniture.  We were laughing so hard we were crying.  I remember him falling on the floor and not able to catch his breath.  But I don’t remember the movie.  I remember that there was a series but it appeared to be about teenage angst (and vampire slaying) I wasn’t interested.  I had enough of that when I was a teenager! (The angst not the slaying!) Don’t get me wrong I enjoy comedy.  I’ve been known to crack a smile and even show teeth.  I just haven’t had a really good belly laugh in a very long time.

Laughter is a universal language.  It crosses borders and brings people together.  It can also alienate people and cause others to commit various forms of harm.  Of course that in itself can be funny!  But I digress.  I don’t know of any culture that doesn’t have some form of laughter.  Wouldn’t it be nice if we could laugh more and shoot less?  We spend so much of our time behaving according to the narrow dictates of societal decorum that when we let loose it can be epic!  Find the time to laugh.  A really good guffaw exercises the whole body!